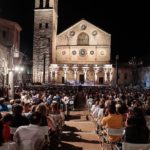 The “Teatro Lirico Sperimentale di Spoleto” was founded in 1947 by Adriano Belli, lawyer and musicologist, with the aim of helping young singers to start a career in opera, above all students who had already completed their singing studies and were gifted with artistic qualities, but had not yet made their artistic debut. Winners of the singing competition at the “Sperimentale of Spoleto” attend a two year’s course where they are trained in several subjects not included in school programmes: preparation of opera, of course, but also training in stage movement under the guidance of the directors and conductors who will later put on the operas during the Debut Opera Season.

The Opera Season is aimed to show the result of the training courses and is usually held in Spoleto in September.

In the last years the Teatro Lirico Sperimentale has gone further afield in teaching and in music training by organising, together with the Region of Umbria, the Province of Perugia and the European Social Fund, courses for accompanists, for piano technicians and for tuners. The “Sperimentale” organises also since 1993 the “Orpheus” International Competition for New Chamber Operas, dedicated to Luciano Berio, who was president of the International Jury since the first edition. The winning composition will have its world première in Spoleto in September during the Opera Season.