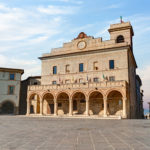 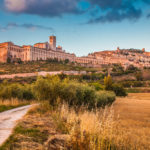 Between Assisi and Foligno, situated on the slopes of Mount Subasio, rises Spello, which, of all the cities in the area is the one that includes the largest number of ancient Roman artifacts. Going up, one reaches the church, built between the XII and XIII century of Santa Maria Maggiore which, although it has a beautiful facade redone with ancient materials in 1644, with a simultaneous architectural change, has within it the greatest treasure. It is, in fact, the marvelous Baglioni Chapel, on the left side of the nave, painted by Pinturicchio with images of the Annunciation, the Nativity and the Dispute at the Temple, as well as other frescoes by the same artist in the cross chapels and some by Perugino on the pillars giving access to the presbytery. Do you love flowers and art? You can not miss the most representative event of Spello, the Infiorata del Corpus Domini which is held between May and June. Every year the streets of the medieval village turn into a wonderful, spectacular, huge carpet of flowers that exceeds 1.5 km. The downtown streets are decorated with paintings of sacred art made with flower petals, a unique event for religious tourism that has transformed Spello into the “capital of flowers”.